History of the Company

History of the Company

1989
The company was estabilished on June 1, 1989. Jari Mäki started as a sole trader and the company name was ”T:mi Jari Mäki” (Sole Trader Jari Mäki). From the very beginning the company’s business idea has been to import car parts and accessories from the US. The first products were toppers and running boards. The company also inspected motor vehicles and made modifications on cars which had been imported from the United States to Finland. T:mi Jari Mäki also sold parts at swap transactions.

1990
In the spring 1990 T:mi Jari Mäki became a limited partnership, and the first warehouse was built in the same summer. The product range increased fast and more car accessories were sold. Lots of American vans were registered in Finland and accessory demand was high. Also tires, wheels and service modules were added to the product range.

1995
A new store-building and more warehouse space were built. The new “American Store” contributed to expand the product range and the company started to sell American toys and some tools.

1999
The company had its 10-year anniversary and published a collection CD called “Koskenkorva”. The CD includes the songs “Koskenkorvaa” and “Amerikanrauta on amerikanrauta” by Mika Sundqvist. First song tells about the village called Koskenkorva, and also about a hard liquor with the same name. Second song tells about American cars. Both songs are in Finnish.

2000
At the beginning of the year 2000 company employed the owners, Jari and Katariina, and three employees. In July the company built a new warehouse with a loading bridge for the freight containers which arrive from the US.

Western Country dancing had entered into Finland and because of that the company added stetsons, western-shirts, belts, bucklets and jewllery into its product range.

2001
Special car rental for weddings was asked for and the company decided to invest in a nine-meter (29,5 feet) long Lincoln Limousine was bought. At the end of the year the company extended the store as the western products needed more sales area.

2002
The special car rental became more and more popular and in addition to the limousine also the other cars were rented. The company started again to inspected motor vehicles and made modifications on the cars imported from the US to Finland.

2004
At the beginning of the year Jari Mäki Oy (Jari Mäki Inc.) bought an original oil pump from Texas. The oil pump decorates the front yard of the store.

2005
During the summer the company built up a new garage building for the car service where four cars can be repaired at the same time. Also the personnel increased; besides the owners, Jari and Katariina, there were now five employees. In the summer the company bought a twelve-meter (39,4 feet) long Ford Excursion Limousine and in the autumn a Hummer H2. Both new cars can be rented too

2006
The company acquired test equipment for GM, Ford and Chrysler brands. The company was also granted the set up licence for the speed control equipment. The personnel increased again; including the owners there were now nine employees.

2007
In 2007, Jari Maki Oy was named as the "Company of the Year" in South Ostrobothnia. This award is given to the most worth and successful entrepreneur in region. The nominees are assessed based on financial growth and improvement within the past five years. Employer success is a factor in the assessment process, as well.

2009
During the summer 2009 the company did enlargement to the garage building which was built in 2005. Now after renovation five cars can be repaired at the same time. There are 5,5-meters long and 9-meters long car lifts in the garage.

Jari Mäki Oy was named as the "Company of the Year" in Ilmajoki. This award is given to the most worth and successful entrepreneur in town.

Store for real cowboys
and cowgirls 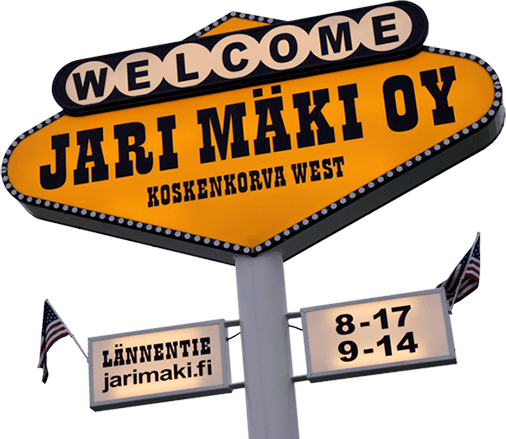